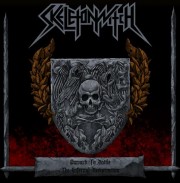 American metallers, Skeletonwitch, have announced the details of the third, and final, installment of their 7″ trilogy. Part III will be on gray vinyl and will feature a recently re-recorded version of “Onward To Battle,” a track that originally appeared on the band’s self-released debut album, “At One With The Shadows.”

The B-side, meanwhile, is a demo version of a new track, “The Infernal Resurrection,” which the group recently debuted on their tour with 3 Inches of Blood. This is the first official taste of Skeletonwitch’s new album, which will be released this fall.

As with Parts I and II, this 7″ — which again features artwork by the group’s former drummer, Derrick “Mullet Chad” Nau — is limited to 500 copies, and once they’re gone, they’re gone! Pre-order is available NOW and the wax will ship in June. Get your copy at the official Prosthetic Web Shop.