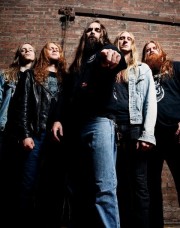 Black metallers Skeletonwitch from Athens, Ohio have just confirmed their appearance at the upcoming Wacken Open Air festival in Germany. The band will join the massive festival taking place over three days alongside a massive lineup of metal bands including Avantasia, Blind Guardian, Rhapsody Of Fire, Apocalyptica, Ozzy Osbourne, Motorhead, Judas Priest, and Children of Bodom, to name a few.

Skeletonwitch’s soonest upcoming tour plans include an April US tour with 3 Inches of Blood through the Midwest and East coast, which will include a stop at New England Metal and Hardcore Festival in Worcester, MA on April 16th.