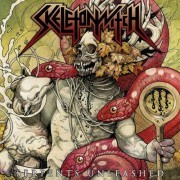 Ohio thrash metal band Skeletonwitch are streaming the title track from their new album. The album titled Serpents Unleashed is due out on October 29th via Prosthetic Records.

Serpents Unleashed is the bands fifth studio album and a follow up to the bands 2009 Forever Abomination which was also released via Prostatic Records. The album was recorded at GodCity Studio with Kurt Ballou of Converge and the artwork was created by John Baizley of Baroness.