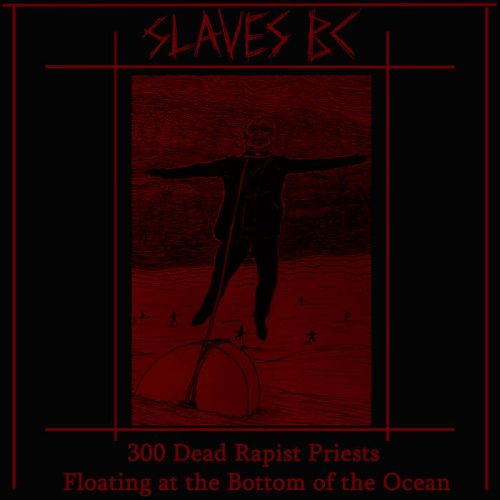 Pittsburgh heavyweights Slaves BC have released an intense new song “300 Dead Rapist Priests Floating at the Bottom of the Ocean”.

Says the band ,”This song was written in response to the report about the over 300 priests in Pennsylvania that have committed child rape in their churches.”

If you think the song title is just meant to shock or ‘virtue signaling’ you are 1. an asshole and 2. gonna have to eat your words when you hear how the track masterfully manages to induce horrific claustrophobic anxious agony and never cheapens such serious subject matter. The song is very long and while very well done, the oppressiveness almost feels inescapable. It is like an eerie micro/macro of how long trauma can stay with someone and ripple outward to affect everything in their life. I found it a rewarding but also very challenging listen for that reason, albeit it is inarguably a killer song. One of the most meaningful and extreme, emotional and incredibly well executed performances yet from a band that hopefully has no plans of slowing down applying their vital pushback to the dipshits, edgelords and relics of the metal world.

Here’s hoping as many of you give this your attention this week as those who are scrambling to watch another exploitative Ted Bundy doc this week. Let’s support actually helping victims.

We have released a new single.

All sales from our bandcamp will go to @RAINN https://t.co/ghnuKNxWBv

More News On Slaves BC:

More On: Extreme Metal, Music, Slaves BC,
share on: