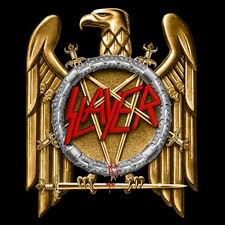 Thrash kings Slayer have soldiered on post-Hanneman despite critics, but I have to say they have the best possible line-up despite the shitty circumstances. I mean, if no Lombardo it has to be Bostaph. Gary from Exodus is the man. So as much as Jeff was my favorite dude BESIDES Lombardo, I really don’t see what the problem is. Everyone in the band is still a formidable musician. People don’t like King’s attitude sometimes but then other times they want to blow him, so it is hard to take seriously. $$$ squabbles with Lombardo are a shitty matter to think about, sure. Jeff wrote most of their classics, but everyone else has played a major role. Bostaph played on fucking “Killing Fields”! If it was some other band people wouldn’t be bugging out as much.

Anyway, Slayer debuted a new song “Implode”. Some people think they should now, but I’d rather root for them. Anyone hating on this should get their ears checked because it sounds pretty much just like Slayer. People who want them never to throw in a slow riff are morons. Seasons In The Abyss is the best album and is full of them. Shit, even Diabolus has plenty of good moments but people are such snobs. I write about metal all the time because I love it, but also because I think way too many half baked ideas get traction and become accepted as truth in the underground.Like anything with melodic vocals is automatically bad? Or having dynamics is bad? Put a gun in your mouth and put yourself out of my misery, please.

This is Slayer. Turn it the fuck up. I for one can’t wait for the new album in 2015, even though I wish Dave were on board. But you know what, I love Shai Hulud still and they’ve had 1,000 members. Same with a lot of other bands. At least Slayer have only had a few changes over the years and rotated people in and out. Chillax and…thrash.