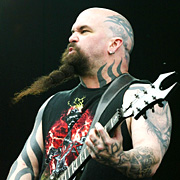 Slayer guitarist Kerry King joined Megadeth on stage for one night only in Los Angeles for the first time in 26 years.  Kerry played with Megadeth for a handful of dates when the band was first starting out, but was always committed to Slayer and declined to leave the band to join Megadeth full time.  King and Mustaine have had a relatively well publicized standing feud for a number of years.  Similar to the feud Mustaine has had with ex-band Metallica, that feud seems to have been ended during the Big Four tour that saw Metallica, Megadeth, Slayer, and Anthrax sharing the same stage.  Kerry joined Megadeth on stage at the Gibson Amphitheater in Los Angeles to perform Megadeth’s classic “Rattlehead.”

To watch the video of Kerry and Dave commenting on the reunion click here.