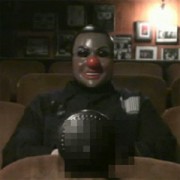 Shawn “Clown” Crahan, percussionist for Iowa heavy metal act, Slipknot, was interviewed recently in the latest issue of the UK magazine Kerrang! When asked about whether Slipknot will continue with another studio album following the loss of bassist Paul Gray, he responded:

“There’s plans [to make another record] but that’s a way off. No one will push it, because it’s going to be a big one. It’ll be closer to Iowa, but it’ll be sadder and crazier. And really thought-provoking, it could even be conceptual.”

He continued, “We’re still taking some time to reflect on our brother [Gray]. Everybody needs to be collecting thoughts so they can get it out and no one has really had time to collect thoughts yet. But we’re the fucking ‘Knot. And when we come out, you’ll know your band is done.”

The band’s tenth anniversary edition of “Iowa” will be released November 1st through Roadrunner Records.