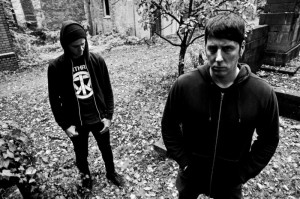 Comments the band of the offering: “The title Ode To The Flame is chosen in tradition of the debut record, Death By Burning to maintain the cleansing power of fire as the key theme. Fire is able to reset anything and will erase this planet one day from any plague that’s been around. Furthermore it’s obviously an ode to passion and iron will. Ode To The Flame isn’t dramatic, it’s drastic. By all means. We discussed the possibility of having no cover at all,” the band continues of the minimalist cover art shrouding Ode To The Flame, “We kinda liked the idea of boycotting the need of any so called ‘art’ which bands try to get people’s attention with. The theme of the record is so one-dimensional and obvious that we decided to skip artwork and just put the title on the record to make it look more like an old book. A manifest, a challenge. We don’t want people to speculate about any meaning. The meaning is clear: kill, destroy, fuck shit up.”

Watch the official in-studio video teaser as well as a teaser of the track “Era Borealis” AT THIS LOCATION.

In related news, MANTAR will play a batch of exclusive release shows in April as well as various festival performances with additional live incursions to be announced in the weeks to come.

Ever since their inception in 2013 and the release of their first full-length the following year, MANTAR has been recognized as one of the hardest working among the German extreme metal underground. Melding the most sinister elements of styles like black metal, doom and punk, representing unfiltered pure primal rage, MANTAR have proven to be one of a kind. Their extremely intense live shows have been seen all over the world and have blown away unaware audiences with their unconditionally tight and brutal performances. MANTAR is a pure evil elemental force captured by only two uber passionate artists that strife for ultimate raw sonic power.

Ode To The Flame will be released on April 15th via Nuclear Blast. The golden vinyl version of the album limited to 1000 copies and available through Nuclear Blast Mailorder only is now available for preorder HERE.