Soulfly win big with “We Sold Our Souls To Metal” 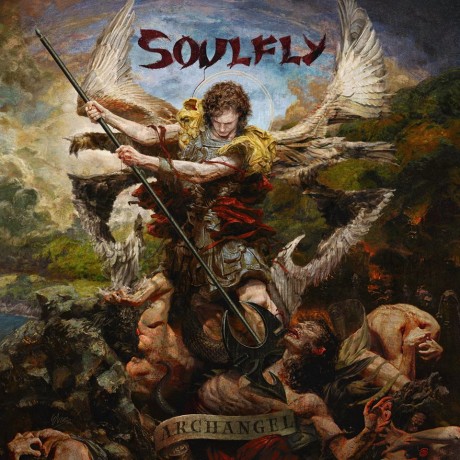 Nu-thrashers Soulfly have a new lyric video for one of their most ever anthemic songs, the rallying cry “We Sold Our Souls To Metal” from upcoming banger Archangel. Like the recent Cavalera Conspiracy clip for “Babylonian Pandemonium”, this clip features Max Cavalera leading a live assault to crazed metal fans flipping out and keeping the metal faith. Blinding thrash meets a Dead Kennedys-esque bass break to die for and a dizzying bridge, with to the point lyrics and imagery heralding metal’s importance.

”I am so proud to be releasing SOULFLY’s tenth album,” comments founder/vocalist/guitarist Max Cavalera. “I feel it is my most mystic album since Prophecy. The guest collaborations have always been a trademark of SOULFLY and Archangel is no different! We can’t wait to play this live for the worldwide tribe!”

In regards to the band and the album cover, artist Eliran Kantor states:
“I’ve been a fan of Max’s music ever since discovering Beneath The Remains in high school. When my wife and I got married ‘Territory’ was even played at the dance party part of our wedding.

“Max asked me to do a traditional piece depicting Archangel Michael – and I tried to go beyond the straight-up neo-classical style as that has been perfected centuries ago, so I mixed in SOULFLY’s own visual world: hence the wings and spear being shaped like the SOULFLY tribal icon, the cliff with the ocean view just like on the first record, and the Brazilian flag being the core of it’s color scheme.”

Archangel was produced and mixed by Matt Hyde (SLAYER, BEHEMOTH, CHILDREN OF BODOM). Check out the track list for all formats and list of guest performers on the album below.

Pre-order Archangel in a bundle or by itself in multiple formats and from this location: http://nblast.de/SoulflyArchangelNB