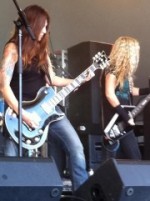 Star & Dagger is a bluesy new metal band featuring past-members of White Zombie, Cycle Sluts From Hell and Queens Of The Stone Age.