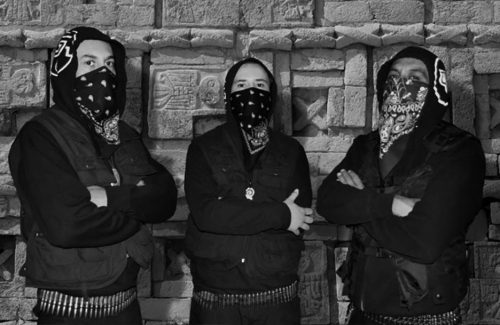 Stream YAOTL MICTLAN’s “Búho Lanzadardos” HERE.
BrooklynVegan presents “Búho Lanzadardos,” the new single from Salt Lake City, Utah indigenous black metal outfit, YAOTL MICTLAN. The song is a precursor for the band’s impending third full-length release, Sagrada Tierra del Jaguar, nearing release through American Line Productions at the end of October.
YAOTL MICTLAN drummer Yaotl tells the story of their new song, writing, “The track ‘Búho Lanzadardos'” (Spearthrower Owl), starts with a minute long indigenous instrumentation intro that sends the listener back to the Mesoamerican past when war, rituals, royal bloodlines, and city-states were a part of life in Ancient Mexico. We collaborated with our good friend Mazatecpatl who recorded the intro for this track in his hometown of Guadalajara Mexico. This song is a tribute to Spearthrower Owl ruler of the ancient central Mexican city Teotihuacan in the year 378, who sent an army lead by Born of Fire to march across Mesoamerica to overtake the most powerful Mayan city-state at the time called Tikal in Guatemala. 1,642 years later you can still witness Born of Fire and Spearthrower Owl’s legacy in the ruins of Tikal and several other Mayan ruins in buildings that they commissioned with central Mexican gods like Tlaloc plastered and carved into them.”
Hear YAOTL MICTLAN’s “Búho Lanzadardos” now only through BrooklynVegan at THIS LOCATION.
Sagrada Tierra del Jaguar will see release next Friday, October 30th on CD and digital formats through Mexico City’s American Line Productions. Find digital preorders at Bandcamp HERE and CD preorders at the label webshop HERE.
YAOTL MICTLAN – which translates into “Warrior(s) from the land of the Dead” in the Mexican language Nahuatl – delivers their most epic material to date on Sagrada Tierra del Jaguar. Focusing on a deeper Mesoamerican mysticism feel with this album, the eight new songs transport the listener into the band’s immersive, ethnic, blackened metal vision. Amid the searing riffs and hammering metal attack, beautiful auras and melodies meet with traditional and pre-Hispanic instrumentation.