Strife to release limited 20 years edition of “In This Defiance” 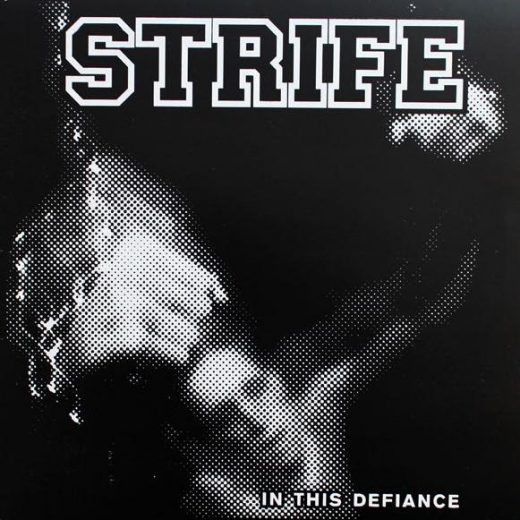 Iconic Los Angeles hardcore warriors STRIFE this year celebrate the 20th anniversary of their landmark second LP, In This Defiance, with a special extremely limited run of the record.
This one-time limited pressing of STRIFE‘s In This Defiance is limited to only 100 copies on pink marble vinyl packaged in a hand silkscreened and hand numbered cover, and is joined by a limited edition longsleeve shirt.
Preorders for the record go on sale tomorrow, Friday, May 5th, at 10am PST at WAR-REC.COM.
More below.
While STRIFE had pummeled their way up through the ranks of the West Coast straightedge scene since 1992, the release of their One Truth debut LP in 1994 through Victory Records saw the band launched into the international hardcore circuit, as the scene was exploding into its most iconic era. They toured heavily on the LP, hardening their attack with a more metallic and brutal live sound for several years, so by the time they were ready to record the follow-up to One Truth, the band was ready to unleash their most venomous material yet.
Released on July 15th, 1997, STRIFE‘s In This Defiance marks the most pivotal sound shift in the band’s history. Following a mechanical/industrial subzero soundscape intro, when the initial riffs of “Waiting” kick in, the brutalizing new sound of the band was made immediately present. With a more ominous, metal-inspired style of production, severely slamming/hard-driving rhythms, and more vicious vocal tone, all simply beefing-up STRIFE‘s already patented grooves and transitions. The breakdowns are more pronounced, the beats roar from the speakers, and a by-the-throat vibe consumes the entire album. Besides being heralded as one of the era’s landmark straightedge hardcore releases, In This Defiance crosses heavily into the metal world, the album featuring guest appearances by Chino Moreno of the Deftones, Dino Cazares of Fear Factory, and Iggor Cavalera of Sepultura.
Marking two decades since its release, STRIFE commemorates In This Defiance with a special pressing of the album, through guitarist Andrew Kline’s own WAR Records. Offer’s Kline on the album’s anniversary, “I can’t believe it’s been twenty years since In This Defiance was released. I feel like this record is not only our most focused album, but, in my eyes, it is the record that truly definesSTRIFE as a band.”
Kline continues, “STRIFE toured with Sepultura on the Roots tour in December of 2016, and that definitely influenced the writing for In This Defiance. Our goal was to write an album that really bridged the gap between hardcore and metal, a record that was much heavier than One Truth that still captured our hardcore roots. You can hear that influence creeping into songs like ‘Will To Die,’ ‘Stand As One,’ and ‘Overthrow’ (which even features Iggor Cavalera on drums). In This Defiance also featured guest appearances from Chino Moreno (Deftones) and Dino Cazares (Fear Factory) to further bridge this gap between the metal and hardcore scenes. Overall I feel like In This Defiance is a perfect hardcore record that not only captures a moment in time but also still sounds current in 2017.”
In This Defiance Track Listing:
1. Intro
2. Waiting
3. Force Of Change
4. Stand As One (Redemption)
5. Grey
6. Will To Die
7. Blistered
8. Forgotten One
9. Wish I Knew
10. To An End
11. Overthrow
12. Outro
STRIFE In This Defiance Lineup:
Rick Rodney – Vocals
Andrew Kline – Guitar
Chad Peterson – Bass
Todd Turnham – Guitar
Sid Niesen – Drums