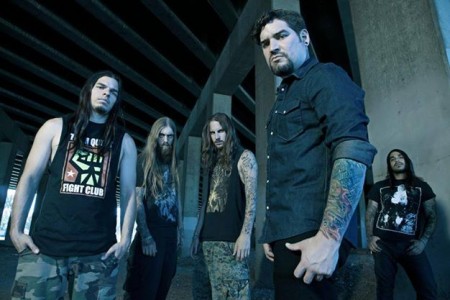 You Can’t Stop Me will be the band’s fourth album and their first with new vocalist Eddie Hermida (Ex- All Shall Perish).

The album will drop on July 11 in Europe, July 14 in the UK and on July 15 in North America via Nuclear Blast.

You can read comments from guitarist Mark Heylmun about the album here.

Suicide Silence guitarist Mark Heylmun on You Can’t Stop Me:

“The long and short of it is this, Mitch left behind a set of lyrics with the title You Can’t Stop Me. This gave us chills to say the least and we knew we had the title and title track. This filled us with inspiration for writing sessions to empower us and empower you, the supporters of SUICIDE SILENCE. We as a band (and Steve Evetts) worked tirelessly on this record and I’m not gonna say we can’t wait for you to hear it. I’m gonna tell you that you have to hear it. You have to sit and listen from start to finish. I’m not gonna tell you this is our best record we’ve ever done. I’m gonna tell you this is the record we care more about than any record we’ve ever done. This is a record that we fought, bled, sweated, and fucking cried over. You Can’t Stop Me is out July 15th on Nuclear Blast, go pick up a copy and turn this sucker up to eleven. We couldn’t be more excited. Thank you all for supporting SUICIDE SILENCE.”