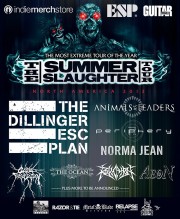 The line up for the annual Summer Slaughter Tour was announced today and it is fierce. The Dillinger Escape Plan headlines the show, with direct support from Animals As Leaders, Periphery, and Norma Jean. There’s also four more bands, making this tour even more insanely aggressive. Cattle Decapitation, The Ocean, Revocation, and Aeon will round out the roster.

There’s still another being added, by way of a fan voting process. So we now have a nine band touring tornado on the precipice of destroying every city it touches down in. Sumer Slaughter indeed. No dates have been announced yet and we will surely have more on that later.