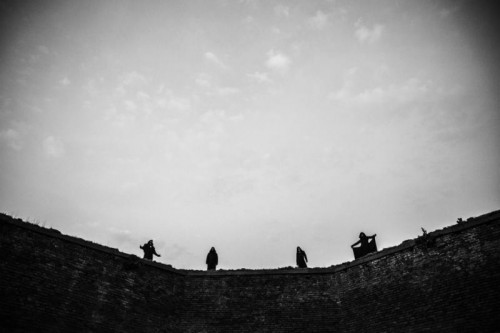 I was talking recently to a bassist in one of my bands and he was worried our first single wasn’t best representation of full scope of what we do in the group. I argued to let each song be what it is, as over time people grasp a fuller understanding of any artist and certain elements will rise and fall in any band’s sound. Sunn O))) might get some snark at times from people who think they take drone and art and jazz, etc. too seriously, but anyone who has ever talked to the band members knows the reverence and high place they hold everything from black metal to cinema scores to philosophy in.

It is Sunn O)))’s drive to be themselves that arguably has allowed much of the smarter strains of metal to rise forefront again or to at least be encouraged to be sustainable at a certain level. From the swirling textural brilliance of Monoliths & Dimensions to recent triump team ups with Ulver and experimental music legend/not shitty politician Scott Walker, Sunn O))) have allowed things drone, the aesthetic of live shows as ritual and words like “soul” to gain as much attention as guitar tone. Arguably things like the ascendancy of Black Yo)))ga or even some of the rebirth of post-metal wouldn’t be possible if not or their contributions, and certainly the band also helped clear up many older, outmoded ideas of black metal’s influence being limited to purely church burning tantrums.

New album Kannon arrives this December and draws upon Eastern philosophy as well as Darkthrone’s Panzerfaust, perhaps the only time you will get to read a sentence like that this week!

The literal representation of Kannon is as an aspect of Buddha: specifically “goddess of mercy” or “Perceiving the Sounds (or Cries) of the World.” She is also sometimes commonly known as the Guanyin Bodhisattva (Chinese: 觀音菩薩) amongst a plurality of other forms. There is a rich lineage behind this idea tracing back through many Asian belief systems, with as many names and cultural personifications of the idea.

SUNN O))) commissioned critical theorist Aliza Shvartz to write text and liner notes around these ideas and topics. She also explores the relations and perceptions to their approach to these ideas via the metonym of music and SUNN O)))’s place/approach within the framework of music and metal overall. The band also enlisted Swiss designer/artist Angela LaFont Bollinger to create the cover artwork, an abstracted sculpture of vision of Kannon. French photographer Estelle Hanania captures portraits of the core trio (Csihar, Anderson, O’Malley) in the impressive and obscurant Emanuel Vingeland mausoleum in Oslo.

Kannon will be available on gatefold LP, CD and digital formats worldwide on December 4th, with a limited number of clear vinyl available on Black Friday RSD, Friday, November 27th.