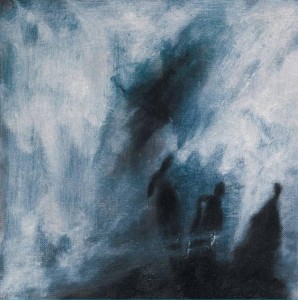 I feel like people that don’t like Sunn O))) have no real sense of the primal. Is it that much of a leap to combine Black Sabbath at half speed with an aboriginal worthy sense of humming disorientation? I’m a sucker for bands that are keen on having a unique aesthetic, from the retro ritual bluesy and dulcet tones of Jex Thoth to the weird as fuck French black metal noise of Spektr (who have a cool ass new song fittingly monikered “From The Terrifying To The Fascinating”).

Not all metal and hard rock needs to be coated in dark yet hooky polish or bounce at the mid tempo arena pace of a Disturbed or Korn or throttle you with the breakneck energy of Testament , Municipal Waste or the more lightning-side of Fear Factory. Sometimes the most glacial music can be a heavier, more world moving experience than the 18th millionth disco-tinged Rob Zombie solo record (all due respect to John 5 who is an awesome fucking guitarist, IMO).

Dømkirke is a less obtuse experience than some of the flagship Southern Lord acts output, a live ritual recorded at the Bergen Cathedral in Bergen, Norway during the Borealis Festival in 2007. The four-song double album was initially released in September 2008 and is available on vinyl only, with one track featuring on each side of the records.