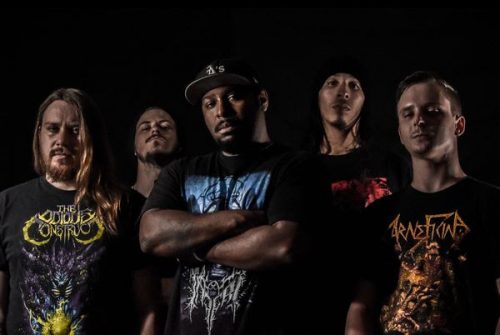 California tech-death metallers Symbolik, who have recently signed to The Artisan Era, are preparing to release their latest album Emergence on April 10.

The Stockton, California-based project has been active since 2009, making a significant splash in the scene with their highly-praised 2011 effort, Pathogenesis.

Emergence is strongly recommended for fans of groups such as The Black Dahlia Murder, Fleshgod Apocalypse, Inferi, and Alterbeast.

Check out a teaser for the album as well as a comment from the band here.

Symbolik comments on the release of Emergence:

‘Emergence’ is a concept that was developed over the last 8 years, bringing our ideas and inspirations to life through an auditory epic of sorts. The music itself was written over the span of the last decade, some songs being written back in 2010 all the way up to 2018 for others. All guitars, bass, vocals, and orchestrations were tracked by guitarist Allen Burton while drums, mixing, and mastering has been handled by Zack Ohren. Lyrically, this album is a tale of an individual who embarks on a journey of self-realization, death, and rebirth. It begins as an idea of infinite possibilities but with only one outcome. Sonically, the music flows seamlessly from chapter to chapter, implementing symphonic and neo-classical ideas along with a call and response structure that will guide you through the story as you go. Focusing closely on strong melodic passages it has been designed to carry the listener through an emotive and memorable experience, leaving them with a unique and long-lasting connection.”