System of a Down Announce North American Headline Tour 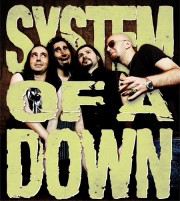 California’s eclectic metal heads System of a Down are pumped to announce a handful of North American headline shows before their trip to Europe this summer and will be joined by New York’s Gypsy punk band Gogol Bordello.

SOAD played their last show in August of 2006 and after working on various side projects and tending to families, they are ready to perform together once again.

The band announced their European tour this past November saying: “We are excited to announce that System will be playing some dates together in 2011. We also want to thank you for your loyalty and support, not only to System Of A Down, but to all of our solo efforts as well. We have no master plan of sorts – we are playing these shows simply because we want to play together again as a band and for you, our amazing fans.”

No reports yet on a follow up to 2005′s “Hypnotize/Mezmerize” dual disc from Columbia Records.

More On: Alternative Metal, Tour, System Of A Down, Columbia Records
share on: