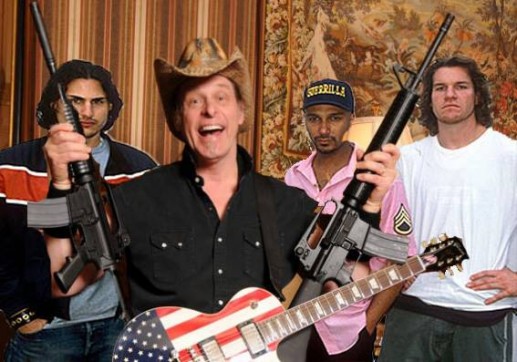 Citing Zack de la Rocha’s foot dragging insistence on inactivity with one of the biggest and most socially relevant bands of all time, Rage Against The Machine have been forced to move forward…with Ted Nugent.

“Dude, Zack just wants to make a rap song cameo like once every four years and, y’know, a lot of political shit has been crazy the last fifteen or however long it has been since we made an album. I mean, he even recorded with Trent Reznor and DJ Shadow and where is all of THAT stuff?” shrugs drummer Brad Wilk. “And with Nick Menza in Sabbath now, I need a steady gig. Like, I was just playing fill in for the Smashing Pumpkins, bro. Shit’s kinda fucked up. What else are we supposed to do?”

When pressed over if they think long time fans might be confused that Nugent could send a mixed message, “bi-partisanship” was mentioned by RATM’s publicist.“We think he has cross-over appeal, way more than Chris Cornell ever did.”

“Finally oppressed whites will have a voice through the music of rock n’ roll that was stolen from Chuck Berry,” says an ecstatic Nugent. “It’s time to take the power back!”

“When Zack said he was doing that “One Day As A Lion“ project even we didn’t think he meant actually ONE day,” adds Wilk.

With Obama a year away from leaving office and Hillary’s email-gate doing Ted’s job for him, Nugent feels it seems like he could relax and reach across the aisle a bit finally. “Shit, Ted Cruz was born in Canada so I guess the time has come to relax a little bit.,” said the Nuge after downing a unicorn/moose hybrid with a spear. “I’m honestly a little bit tired of being the “old crazy guy”. In a way, the Zapatista Army of National Liberation spend more time in the woods than I ever have and that’s to be admired. And obviously discrimination in America is never going away, so I might as well prove that I can rap better than any Muslim mongrel. Besides, Obama trying to reach across the aisle instead of swatting us GOP like bugs when he had a mandate after we tricked y’all into going into Iraq just led to us running Congress and the Senate, haha.”

When we tried to reach Tom Morrello for comment he just tweeted at us: “Fuck it.”

Bassist Tim Commerford was too busy climbing shit to comment.