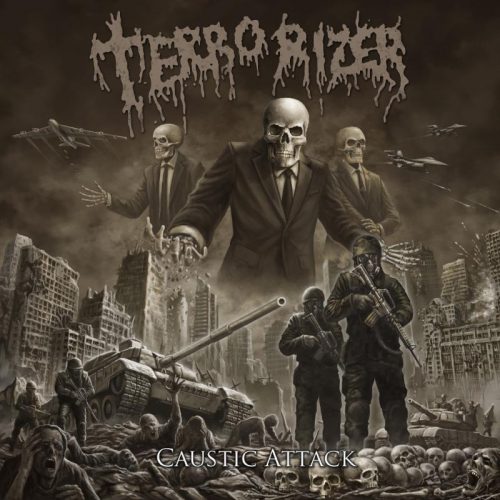 With legendary blast drummer Pete Sandoval ready to revive TERRORIZER for another momentous grinding onslaught,  the groundbreaking band have united with The End Records for the release of their long-anticipated new full-length, Caustic Attack. Produced by Jason Suecof (Deicide, All That Remains, Kataklysm, Battlecross) at Audiohammer Studios in Sanford, Florida and featuring the apocalyptic cover art of Timbul Cahyono (Rotting Corpse, Pyrexia), the record serves as the band’s first studio offering in six years.

“The original TERRORIZER didn’t have solos, so we took the same approach,” Lee Harrison says. “It was just riff after killer riff. That was an interesting challenge for me – to keep the music fresh without relying on solos. But the great thing about not having solos is it allows us to keep a dense sound as a three-piece. When you put leads in there, you need a second guitar or else the bottom falls out. Staying a three-piece makes it easier to travel and tour, and we didn’t want to mess with that formula.”

Now that Sandoval is devoting all his time and effort to TERRORIZER (he left Morbid Angel in 2013), he plans to tour extensively and then record another album. The six-year curse is officially broken.

“It feels so great to be back playing every day,” Sandoval says. “I worked really hard on my recovery and all that work is really paying off now because when I play these songs I feel the same way I did in 1990 or 2000. I feel young again and I can play with no problem. And that’s hard to do because this new album has a lot of changes, double-bass, fast blast beats. You name it.”

TERRORIZER’s Caustic Attack will see release via The End Records this fall. Further details including track teasers to be unveiled in the coming weeks. In the meantime you can never get enough World Downfall, a stone cold mandatory classic that still smokes most stuff released now.