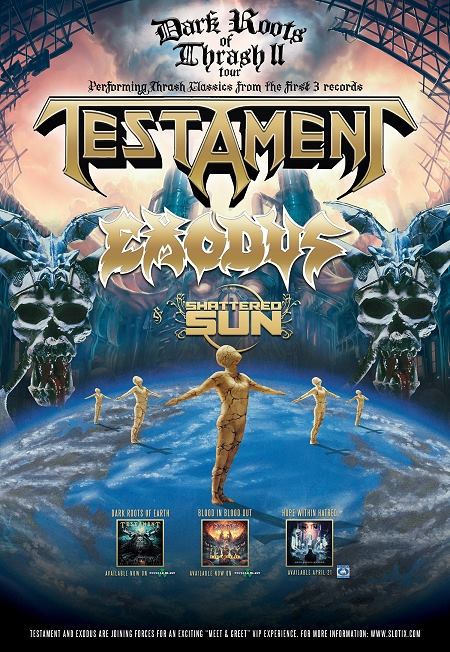 HUGE news from camp Testament (my personal favorite thrash band) today. Not only are they touring with two other great bands in Exodus and new Victory Records up and comers Shattered Sun (what a fuckin’ lucky break to land this tour!), but they are …man, it’s so good. Just read the whole press release. I can’t deal.

TESTAMENT to Perform an Exclusive New Set List, Including The Legacy and The New Order in Their Entirety + Select Practice What You Preach Album Cuts

Pioneers of the classic American metal scene, TESTAMENT, are announcing what will undoubtedly be the most crushing heavy metal tour to hit North America this spring – the Dark Roots of Thrash II tour! The Dark Roots of Thrash II tour will conquer North America for five weeks, beginning April 1st in San Francisco, and will include select TESTAMENT and EXODUS festival performances. Select cities are on sale now, and more dates will be announced soon.

Dates and more info BELOW.

In addition to its monumental line-up, the Dark Roots of Thrash II tour sees TESTAMENT serving up another surprise for die-hard fans of their early tenure. Each night, TESTAMENT will perform an epic headlining set that digs deep into the early discography that launched their worldwide career spanning two-and-a-half decades. TESTAMENT’s exclusive set will feature full-album performances of 1987’s classic body of work The Legacy and 1988’s unrelenting The New Order, in addition to select tracks from 1989’s mainstream crossover Practice What You Preach.

The Dark Roots of Thrash II tour marks the live re-introduction of TESTAMENT bassist Steve DiGiorgio. This isn’t DiGiorgio’s first time playing with TESTAMENT, as he is credited for recording bass on 1999’s The Gathering and 2001’s First Strike Still Deadly. Additionally, the tour will mark the live debut of Alex Skolnick’s anticipated brand new signature ESP guitars and Budda amps. Learn more about the guitars and amps at these links.