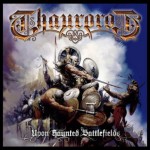 Finnish power metal band Thaurorod have announced that they have parted ways with vocalist Markku Kuikka and have replaced him with Vision Divine’s Michele Luppi.

The band had this to say about Kuikka’s departure,

“The reasons why Markku is not in the band anymore is his lack of abilities to perform and to make the show that we absolutely want to give to the audiences that comes to see us on stage. We need to continue with a guy who can make audience go crazy every single night!!! We are looking very much forward to our future shows and Power Of Metal tour with Michele! Come to give this Italian gentleman a warm welcome! We already played a show in Nosturi, Helsinki with him and it felt absolutely great to share stage with him! Sorry for it took so long to make this announcement about the vocalist situation as there have been a lot of speculation because we finished the last tour with a different vocalist than who is singing on the album. We just wanted to take the time to find the best possible singer for the band first and then announce the news. At the moment THAUROROD is composing new material for the second studio album. More updates on this will be posted in coming months.”

The band was recently confirmed to perform at Metalcamp 11 Open Air festival in Tolmin, Slovenia. Their latest album “Upon Haunted Battlefields” was released on September 24 via NoiseArt Records.

More On: Power Metal, Break Up, Thaurorod, NoiseArt
share on: