The Arkhams release “Not For This World” dead friends tribute 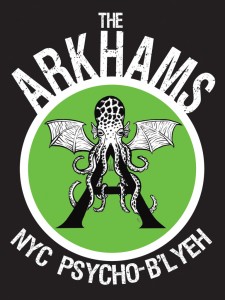 While not metal, NYC psychobilly band The Arkhams have done something quite metal (I mean, besides having a name that references HP Lovecraft and Batman simultaneously). The band (on hiatus) has just released “Not For This World”, a tribute for many friends fallen over the years to suicide or drugs, on their band camp. Hear and purchase the song HERE.

Also, I myself Morgan sing backups along with band dancer Rose Arkham and I did a guest vocal on verse three (I think). I have known Matt “The Knife” forever and he first told me about Gorguts and Cannibal Corpse, so that counts for something.