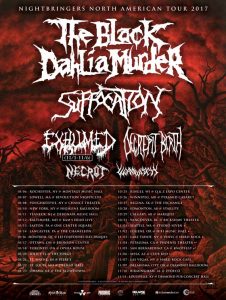 Come with me back in time. The day is Saturday, October 7, 2017 and we are on my porch in quaint Milford, NH waiting for friends arriving from Canada, any minute, to go and see The Black Dahlia Murder in Lowell, MA. I excitedly tap at my phone waiting for the arrival of my buddies so we can drive down to pregame the show. To my shock, literally moments before my friends arrive, I get word that the show is cancelled. In New Hampshire bigger shows get cancelled, seemingly, all the time but usually our firearm-less neighbor to the South can keep its shit together. Apparently not this time.

Shortly after the cancellation there was word that the show would be rescheduled for Sunday, October 15, 2017. A few days after that it was revealed to be at Wally’s in Hampton Beach. Due to past experience I had zero faith that this show would take place. The show was on a Sunday and to boot it was in New Hampshire at a venue, that from what I understand, hasn’t had a metal show in years… but I kept my hopes up and low and behold the show took place.

Wally’s is located in Hampton Beach, NH. Hampton Beach is a seasonal beach area with a casino, bars, endless hotels and of course Wally’s. The venue consists of a decent sized stage area, they have a set back bar and a porch/smoking area. It’s that sort of perfect size for a metal show where you can get close enough to get sweat on or just hang at the bar. The normal clientele seemed a decent 50/50 split of interested in what was going on and just leaving.

Once we settled everything and got in Wormwitch had already played. I feel like a bitch for not catching them because, while I had never heard them, that name is fucking incredible; and it sucks when opening bands don’t get any love. 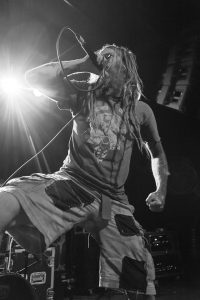 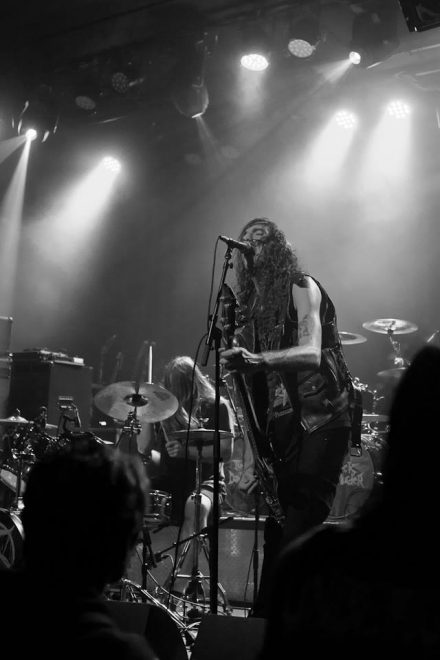 Necrot kicked in and I had heard of them, but not enough to be considered an authority. Despite being the second band they were seemingly still employed in the worst job in the metal scene, warming up a sparse crowd of dubious interest. They seemed oblivious to the crowd size and put on a fucking great show. I was all the more impressed with the sound considering they are a three piece composed of Chad Gailey on, what appeared to be a rather minimalistic, drum kit, Luca Indrio on bass/vocals and Sonny Reinhardt on guitar. The band is touring on the tail of their 2017 release, Blood Offerings, and played a solid set which evoked a kind of throwback style of heyday Death Metal. After the set, the band was more than happy to shoot the shit with anybody and couldn’t have been nicer.

Decrepit Birth was one of the bands I was more excited for, I’ve been a fan and had never caught a live set…which didn’t change. After some technical issues and sort of’ a song they shut down the set. I went outside for a smoke and found out their guitar was fucked and they just smashed it and threw it into the crowd, which was later confirmed as a guy exited the venue with a smile and a headless guitar. It fucking sucked but the band couldn’t have been more humble and apologetic and were also around for the whole show chatting people up and generally being awesome. *As a side note, I have since found out that Decrepit Birth dropped off the tour due to medical issues with guitarist Matt Sotelo and have been replaced by The Zenith Passage. Our thoughts go out to Decrepit Birth and The Zenith Passage, We wish you the best of luck on the duration of the tour. 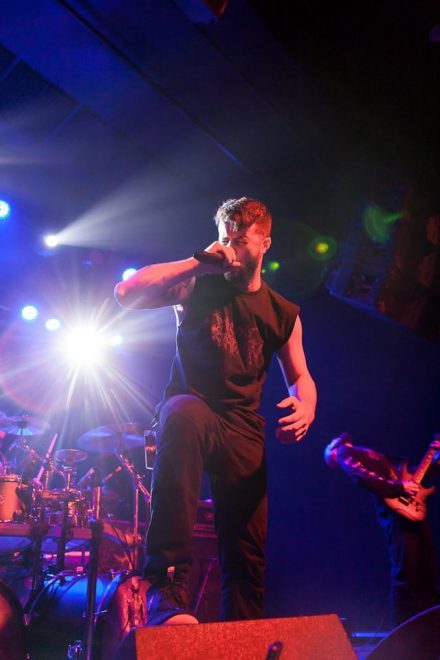 I am biased as fuck when it comes to this review. I am a huge fan of Suffocation. I have seen the band a half dozen times and they have put on a solid fucking show each time. The last time I saw them was earlier this year in February and they fucking murdered. They put on one of the best of the 60 bands that played. When they got on stage I was surprised to see that Frank wasn’t fronting the band. Morgan, of Metal Riot fame, later told me that Frank has stepped aside on touring duties and Kevin Muller from The Merciless Concept has taken on his place at live shows. Now, I am an old man, in metal years I am basically a wizard; but Muller looked like a kid to me and I was a little unsure of his abilities to take on the mantle as vocalist of Suffocation, but I was fucking pleasantly surprised! They went through a range of older songs all the way up to “…Of the Dark Light.” In addition to Muller the rest of Suffocation was incredible. Its cool to see a band who has existed, in some capacity since 1988, still enjoy the fuck out of what they do. 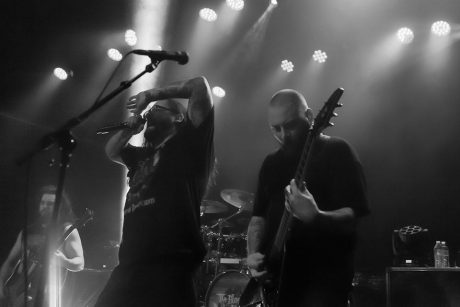 I have never understood the polarizing effect The Black Dahlia Murder has on the metal community. There are people who just fucking hate them and shout “deathcore” and die hard fans complete with unofficial fan groups. If you fall into the “deathcore” group I am afraid this article will only piss you off. I have seen these guys play with some of my favorite bands thinking “there is no way they can out perform “X” band” only to see them beat or equal bands with a decade of additional experience. The stage presence of frontman Trevor Strnad is fucking hypnotic and while, with the exception of guitarist Brian Eschbach, there seems to be a somewhat frequent line up change they consistently put out great material and have a stage presence to rival the greats. The band is touring to support their 2017 release Nightbringers and it’s one of the few times I have wanted a band to play more new material instead of sticking to the classics. Nightbringers is short as fuck as albums go, coming in at 33 minutes, but in my opinion one of their strongest in a while.

As a general overview of the show. The line-up consists of a legendary Death Metal band, a First Ballot Hall of Famer and a great supporting cast. Hell, even if you only like a one of the headliners bands it’s not a bad deal. As an old man I have been to my fair share of shows and interviewed some of my heroes, all of which have been super awesome, but besides huge festivals I have rarely had this level of interaction with band members. At the end of the night myself and about a dozen people were chatting up multiple bands about metal, video games, weed and future tours; and from multiple Facebook posts I can tell you, this isn’t isolated to Hampton Beach. I know I am late as fuck in publishing this but if you get a chance to catch this tour, or any of the bands on it, I cannot recommend it enough. You know, unless you are into power metal, in which case stay in the Forest of Unicorns.