The Fall of Ideals Indeed!: Album Review: All That Remains- “A War You Cannot Win” 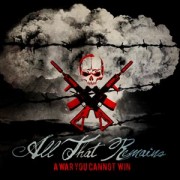 I suppose you could file this under the “knew it would happen” category. Once powerhouse metalcore leaders, All That Remains now seem to be unable to fill their own shadow. Mediocre and catchy melody run rampant through this release, along with Phil’s vocals going even further away from say, The Weak Willed. Am I gripping to the edifice of a decadent past? Maybe, but they could at least fake a metal album, or do a concept pretending to be a metal band. Something, just not this.

All That Remains offer up their sixth full-length album that sounds more like the fifth that really wished it was the fourth, still riding the wave of their authoritative breakout third album with much to do. The band has stormed the feeds of several social network sites in rabid promotion of A War You Cannot Win out on Razor and Tie. They launched an Instagram chronicling their tour (currently out with Dethklok, Machine Head and The Black Dahlia Murder), Phil and his guns are all over Twitter and their Facebook’s daily inundations of pre-orders, merch sales, and consistently engaging status updates have really fucked my news feed up. While this really isn’t a new sales tactic for bands, it is a new trick for this one. And it’s working. People fucking clamor to that interaction and digital presence and all I can think is good for them. Get someone else to like this album.

This album does exactly nothing for me and it pains me to say it. These guys molded my young metal brain with the fall of ideals and I followed them relentlessly throughout the Overcome years. Their previous release I can’t remember and this will probably face the same fate. Oh well. They seem to have droves of new fans to keep them on the aggressive rock charts.

As for me, I’m going to see if my cousin still has my physical Fall of Ideals disc, I gave it to him as educational material after he said he wanted to go to a Hell Yeah concert. Ugh. ATR toured with them as well.