The Gates of Slumber Announce New Album and Tour Details

Indianapolis doom lords The Gates of Slumber will unleash their hotly-anticipated fifth full-length album “The Wretch” on May 10, 2011 via Rise Above Records/Metal Blade. Featuring eight slabs of punishing metal, “The Wretch” boils doom down to its purest form, resulting in the Indianapolis trio’s finest work to date.

Recorded during the cold British winter of 2010 at London’s Orgone Studios and produced by Jaime Gomez Arellano (Ghost, Angel Witch), The Wretch sees The Gates of Slumber pushing its trademark blend of skull-crushing riffs and pounding rhythms to new heights and marks a return to the slower all-out doom tempos of the group’s early albums combined with “true doom metal” lyrical themes. From the funereal crawl of opener “Bastards Born” and the all-powerful title track, to the pounding stomp of “The Scovrge ov Drvnkenness”, the barbaric “To the Rack with Them” and the epic “Castle of the Devil”, The Wretch is a future classic featuring outstanding performances and some of the heaviest metal you will hear in 2011. The album’s deathly cover art is taken from a watercolor and gouache painting by Arik “Moonhawk” Roper (High on Fire) titled “Emerald Eclipse”.

“This record is frustration and disappointment put to music,” said The Gates of Slumber frontman and founding member Karl Simon. “No heroics this time, no swords; no sorcery. No fantasy. That stuff is OK; it’s fun…whatever, but we don’t feel it these days. This one is all about others let you down almost as much as you let yourself down. It might not make sense to you, but then you probably only have the last two records as a digital download. That, or your world is summed up by someone else’s soundbite.”

Previous to the release of the new record, The Gates of Slumber will head to Europe for a two week tour with U.S. doom veterans Place of Skulls. The band will wrap the European trek on April 16 with a performance as one of the featured acts at the 2011 Roadburn Festival in Tilburg, Holland where it will share the stage with Candlemass, Swans, and more. The band will then kick off a U.S. tour alongside Orange Goblin on May 28 in New York City. A full listing of tour dates can be found below. 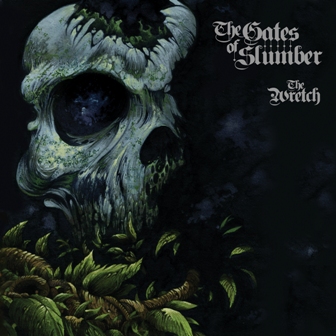 More News On The Gates Of Slumber:

More On: Doom Metal, Release, The Gates Of Slumber, Rise Above Records
share on: