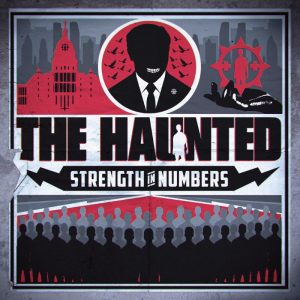 The Haunted have released a song from upcoming ninth studio album Strength In Numbers. Recorded at Parlour Studios in the UK with producer Russ Russell (Napalm Death, Dimmu Borgir, The Exploited), the album will be released worldwide via CENTURY MEDIA RECORDS on August 25, 2017. The song continues the band’s recent trend of focusing more solely on their aggression, since the return of vocalist Marco Aro (who is a screamer). I’m especially liking Jonas’ bass attack on this one, giving the track extra punch.

THE HAUNTED checked in to comment on the track as follows:
“We’re very excited to finally be able to air our first single from the new album Strength In Numbers and let it set the tone for the brutality of the album. “Brute Force” is one of those songs written in the early stage of making the album and shows our hunger to make new music, uncompromising, unforgiving and just to the point.”

More On: Thrash, Video, The Haunted, Century Media
share on: