The Issues At Heart: MR Exclusive Interview- Miss May I

I recently caught with Miss May I’s Ryan Neff for a sit-down interview at the House of Blues in Anaheim, California. The band is currently on the AP Tour alongside Like Moths to Flames, The Ghost Inside, The Amity Affliction, and Glass Cloud.

To see what he had to say, click here.

You guys recently dropped the At Heart album and took that out on the Warped Tour with you- and have been touring non-stop how are the fans reviewing the album?

It’s been good, on this tour we’re playing more songs off that album than any other album and it’s gone over really well which is obviously what you want as a band and it’s the best result you could hope for is to go on tour and have the fans react really well to it, so I think so far it’s been really good.

What is the meaning behind the album title?

The album is a more stripped down version of the band lyrically. The album is based around things in our normal lives from the two years between albums, so more real life experiences, it’s not a concept or anything like that it’s all just personal experiences. 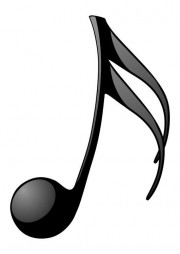 What is your favorite song off the new album and why?

My favorite song off the album instrument wise is “Second To No One” just because it’s the most fun to play. So far that we’ve played live is “Bleeding Out” is really fun and “Days By Days”—“Days By Days” is probably my favorite.

You guys played Warped Tour in 2011 on a side stage and moved up the very next year to the main stage how did that make you guys feel?

It’s good,I’m 24 and I’ve already been on the two biggest stages of the Warped Tour and the band’s only been touring for 3 ½ years now and we’ve probably accomplished more than we ever thought we could. Doing stuff like that is always surreal but at the same time it’s not completely unexpected because while you’re on tour you see all that stuff. It’s just crazy to be on a tour that I used to pay to go to and to be on tour and on the same stage as bands I used to pay to go see—it’s crazy and amazing.

You guys have been super busy lately with tours- I know you just got back from Latin America not too long ago-  after this tour you’ll be heading back to the UK, what are you expecting from that this time around?

It’s going to be our fourth or fifth time going to the UK- I’m expecting this to be our biggest headlining tour to date in the UK, we did a headliner last year and it went really well, we did another big tour supporting Parkway Drive and I think all those good tours are going to make for another good time.

Miss May I has been around for 5 years and has taken off and captured the attention of many in a very positive light rather quickly- how are you guys taking the newfound attention?

It doesn’t feel really fast for us, 5 years together, 3 ½ years of touring—but since At Heart came out things have really picked up, I am taking the attention great, I’m having a great time, I feel like the music is being respected and it’s making a difference to people, which is the goal to write music that’s going to change people’s lives and help them get through stuff and it seems that this album is really doing that for people and really I can’t ask for anything else and we’re pretty excited about it. So far we haven’t had too much of the bad side and hopefully it stays that way and we can keep away from that stuff. 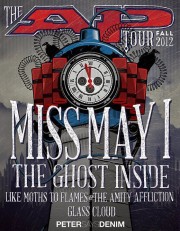 How is this tour coming along for you?

This tour has been good, it’s the biggest production we’ve done to date, giant venues we’ve never played before like the House of Blues, which is pretty scary sometimes, but it’s been good, a few hiccups here and there, bus trouble, just some minor bad luck, but overall it’s been great, we’re playing new songs which is the best part, it’s our first time playing these, so we’re having just as much fun as the people coming to the shows.

Your video for Day By Day just came out – the video shows you guys being arrested by S.W.A.T. members- what is the message behind this video and how did the idea come about?

(This was not a bad answer!)

You recently got new ATA cases and sounded really stoked to use them on The AP Tour- how are they sounding?

Everything sounds awesome, we have all new gear from all our favorite brands, we have  new guitars, basses, new lights, it’s awesome, that’s where the hiccups were the first few days, we always have to get through how to work all your new stuff and get all the kinks out, but I’m pretty confident now, last night was the most smooth night of the tour so far, so I’m sure the rest of the tour will go very well.

Most memorable on stage moment?

On the Warped Tour I got to perform with The Used and that was so sick and awesome!

What’s the craziest thing you’ve seen on the road so far?

Oh man, who knows!? There’s so many, it’s hard to answer that, it depends on what you consider crazy. I don’t consider fights crazy, so it’s not that. My favorite would have to be the odd and interesting people you see and meet while on the road. We played around Halloween time at this club called Revolution in Florida and it was an awesome show and there was this Halloween party going on next door and it was just madness, it was just this huge five block party of awesome costumes! With all the drinks involved and different people on tour you definitely get some interesting things, but that would be the best one I’ve seen so far.

Lots of touring, we’re going to write a new record, not sure quite when in the year, but in 2013 for sure, hopefully we’ll be able to go in there and record it as well. Lots and LOTS of touring, there are so many great tours we’re being offered right now, new places we haven’t been, old places, same as always, staying on the road, having a good time, and playing a bunch of gigs.

No, none yet, just because I’m never able to stick to them, so I never really make them to begin with.

If you could put together your dream tour (dead or alive) who would be on it?

Three Days Grace- that guy’s voice is second to none

Pantera would be unreal and crazy

This interview was tons of fun! Ryan said the guys are looking forward to the future and to the upcoming tours. The show was epic and I recommend you check out the AP Tour when it runs through your town, especially if you’re digging Miss May I’s At Heart album.

For all things Miss May I check out their Facebook and Twitter. Huge thanks to Ryan Neff for taking the time out of his busy day to chat with us!

More News On Miss May I:

More On: Metalcore, Exclusive, Miss May I, Rise Records
share on: