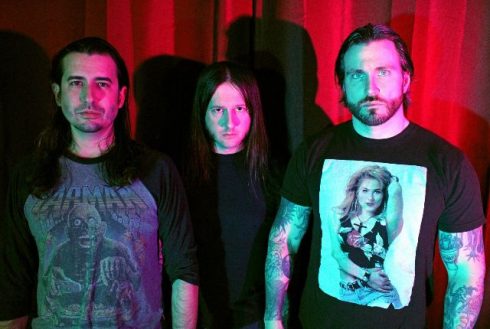 The boundary pushing creative characters behind THE LION’S DAUGHTER are streaming their potent new record Skin Show ahead of Friday’s Season of Mist release date. The immaculately Sanford Parker produced and Colin Jordan mastered release builds on the synth explorations of Future Cult with an even more sophisticated aura of barely contained unease or outright explosive sleek yet blackened dystopian angst. These songs create an atmosphere of illicit and surreal, disturbingly tormented sensual unrest that is accentuated by the visual presentation intensely.

Giordano says, “We worked with (artist) Mothmeister again for the album art and used a similar approach as we did with the music. Things are stripped down, more direct, more focused. There’s a sense of fear, isolation, and madness that very much correlates with the music. The character on the outside is in white and surrounded in light, while the character on the inside is in black surrounded by darkness. But it’s ultimately two sides of the same character. I think that’s a good representation of the themes within the album, dark things within people that they may want to keep hidden.”

The band will also be hosting an in-person album release party and merch pop up in their hometown of St. Louis, MO on April 8 on the Punk Patio of The Record Space. Fans who attend the event will be able to purchase the record one day in advance of the release and will have an opportunity to meet and greet the band. 4 Hands Brewing will be sponsoring the event and providing free beverages to those who are 21+. The event is free to attend and will occur from 4:00 – 8:00 P.M. CDT. RSVP HERE.

In addition, THE LION’S DAUGHTER will be hosting a two-hour radio special via Gimme Metal on April 9 @ 3:00 P.M. EDT to celebrate the release of the new record! Frontman Rick Giordano has cultivated a very special playlist and will be present in the live chat to interact with fans! As always, it is FREE to subscribe and sign up! Tune in HERE.

Moreover, THE LION’S DAUGHTER will also be supporting the new offering with a brand new live stream! The virtual concert is part of a four night event by Sinkhole and will air on Sunday, April 11 @ 8:00 P.M. EDT. The band will also be joined by HELL NIGHT for a double feature! Tickets and merch bundles are available at THIS LOCATION.