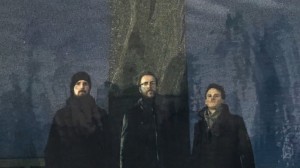 So, I’m sort of postponing watching The Walking Dead this morning on cable catch up because (spoiler alert) I already heard that they brought Glenn back in a really implausible way. Just read Kim Kelly’s awesome new road article on C.O.C. for Noisey (and sort of wishing they’d still play recent non-Pepper gem “Tarquinius Superbus” live in this formation) and then browsed some new Riding Easy patches. Bitching to myself about the inconsistent self-centeredness of humanity or people I’ve dated. Walked the dog. Thinking of ways to make more money to move West eventually. So in other words, it was a usual day.

Until I checked out the new jam from The Moth Gatherer via the fine label Agonia, purveyors of numerous killer metal slabs of darkness, usually on the blacker end of the metal spectrum like Aosoth or really soul splitting and barren stuff like the rad new Hypothermia record. I had heard of the band but the name sort of reminded me of Ashton Kutcher and The Butterfly Effect and I already love The Atlas Moth way too much, so did I have room for another “moth” band in my steel heart? Well, I never should’ve put off listening to them because the band revitalized a dull day with a nine minute new banger called “Attacus Atlas” that melts collective minds like the most ritualistic Cult Of Luna or Ghost Brigade side was melded to even heavier guitar passages that are nearly as doomy as they are post-metal. The song comes from new album The Earth Is The Sky, which you may pre-order here. These Swedes are now firmly on my radar and I am stoked.

Commented  the band: “The Earth Is The Sky is an album where we tried to take everything as far as we could. There where points during the recording where we honestly spoke about giving up and calling it a day, it felt like we would crumble under the album. But we suffered through. The result is a desperation about how humanity drags it all to the end. Where A Bright Celestial Light was an introvert journey into decay, The Earth Is The Sky is a journey to the highest point on Earth where you sit down and contemplate about our existence while watching the flames from the burning world”.