The Paramedic hopefully improve with new album “Diary Of My Demons” 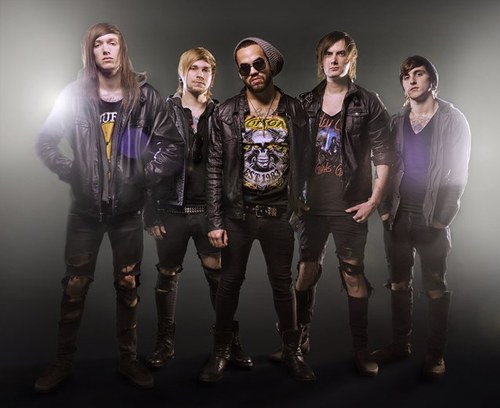 Dayton’s The Paramedic are a buncha djentiles who usually hop up and down in unison (not a good look for any band, especially in 2014) but have enough tasty riffs and a pretty cool band name. We’ll let it slide, guys. I mean, I like Caliban and they do it sometimes…but they also are German and have way better, meaner songs. Atleast The Paramedic don’t do that weird suck your own dick while playing guitar that Korn popularized (though “Clown” is still da bomb, yo).
Anyhow, we have to throw some articles up about younger, scenier bands sometimes or else people will migrate to shittier “websites” for their “metal” news. Wait! Keep it true! From now on only Orange Goblin and Decapitated articles will be published by Metal Riot. Nah, it’s all good. I actually am trying to like The Paramedic. They are a newer band but show promise and I have to give props to their singer for dropping out of college like I did to play music (and for being thoughtless enough to cover Lil Wayne). Hey, they got more fans than I do!  I think as they get older that if they don’t break up they could hit their stride in a few records and stand out more. Plus their bio simply keeps it pretty Charlie Sheen and just says “Snort coke, stab sluts”. Pretty soon they will be headlining the “hottest dudes with emo chic hair in hard rock”  tour and you can mosh da fuck out to new song “Have A Nice Day” (Bon Jovi cover?).
Ok, I take it back. Only the singer looks cool. The rest of these guys gotta go. Shave your fucking heads or something. Christ! Did you guys all sit around and rip your jeans together? Go listen to some Pentagram, smoke some crack and call me in ten years for money. Anyhow, I rarely really dig Bullet Tooth stuff (besides the awesome Death Ray Vision), but the label claims the new Paramedic will be pretty dope:
Diary Of My Demons sees a maturation and growth that has been unparalleled by the band. Vocalist and lyricist Michael Luciano commented, “This album was not for the faint of heart, and I think these songs are going to show that. ‘Diary Of My Demons’ is an album full of darkness, anger, sadness, and self-reflection. There were some things that I needed to get off of my chest, demons that I had to let go of. What better way to let them go than by sharing my demons with the world.”
Here’s hoping you let go of your corny lookin band mates, dude. Anyway, The Paramedic are definitely a lot better than bands they have toured with like Dance Gavin Dance and The Bunny The Bear. Remember when bands had names like Vomitus, Nausea, NunSlaughter? Sigh. No, maybe you probably don’t.
Click HERE for the song titles.

More News On The Paramedic:

More On: Metalcore, Release, The Paramedic, Bullet Tooth
share on: