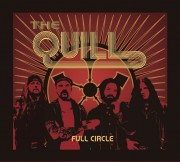 Swedish rockers, The Quill, have released the music video for their song “Medicine,” off their new album “Full Circle,” which is the band’s first studio album in five years. The video was shot in the Tierp Arena in Sweden.

The new album was released in June 2011 through Metalville Records.

More News On The Quill: