The Weight of Silence release “Green Is The New Black” ft. Danny Leal of Upon A Burning Body 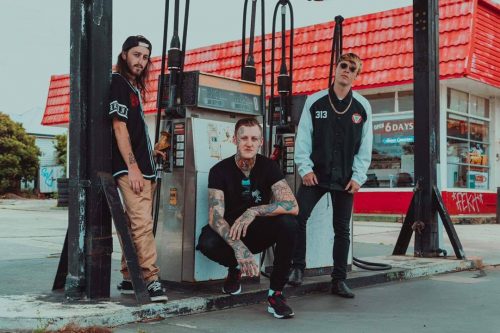 Australian rap-metallers The Weight of Silence released their latest track, “Green Is The New Black” earlier this week.

The track, which was released on July 17, features vocalist Danny Leal of Upon A Burning Body.

Dubbed “trap metal” in the press release and being associated with the likes of Attila, “Green Is The New Black,” is, you guessed it, about smoking weed. It’s also about getting a blow job on a plane. And then Danny is also there and has a lyric.

The Weight of Silence vocalist Jacob Pedersen explains the bands new direction for “Green is the New Black”, the debut single from their upcoming album:

“We’ve been really influenced as a group by some of the newer trap and rap sounds coming out at the moment and we’re blending that with the metal influence we’ve always had. We are also very honoured to have Danny Leal take a part in this and really bring a section in this already lively song to a new level. Upon A Burning Body’s music has been a big influence on us and you’ll hear that in this upcoming album release. You can expect heavy, hard hitting riffs with huge and heavy vocals, alongside moments with trapbeats and rap vocals.”

You can check out the video for “Green Is The New Black” here.