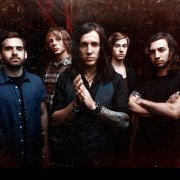 Arizona metalcore moshers The Word Alive have today unleashed the music video for their song “Life Cycles” off of the album of the same name that was released in July 2012 via Fearless Records.

The Word Alive are currently on tour with Sleeping With Sirens in Europe. They will be returning to the United States to support Killswitch Engage on tour starting on June 3.

More News On The Word Alive: