“The World Is Yours” encourage ARCH ENEMY on new rager 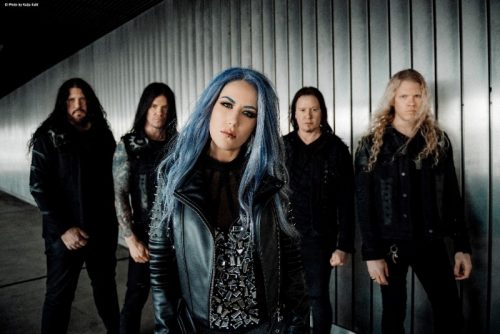 ARCH ENEMY have risen once again and are ready to accelerate at full force as they unleash the masterful new single, “The World Is Yours”, taken from their forthcoming album, Will To Power, due out on September 8 via CENTURY MEDIA RECORDS worldwide.

Mastermind Michael Amott comments, “We’ve been hard at work on the new album for a while now and we’re proud to present the first taste of new Arch Enemy music in over three years with our new single and video, ‘The World Is Yours’! This was the first song I wrote for the upcoming ‘Will To Power’ album and Daniel (Erlandsson, drums) helped me arrange and finish it up. One of many songs we co-wrote and co-produced this time around. We had a blast recording together with the full band in the south of Sweden and then mixing with Jens Bogren, who did a superb mix and mastering – in my opinion even surpassing the epic sound on our previous record, ‘War Eternal’. People that have heard this song in particular are saying it’s got the classic anthemic Arch Enemy vibe going on, and I think they might be right about that… Looking forward to playing it live on stage later this summer!”

The massive debut track, which can be heard and seen in their rousing music video HERE , will be offered as an instant download with all digital pre-orders and is also available on all streaming platforms.

Head to http://willtopower.centurymedia.com to find all digital and physical pre-order options.