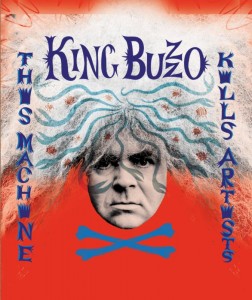 The Melvins’ Buzz Osborne, aka King Buzzo, is streaming his solo debut, This Machine Kills Artists, via Dangerous Minds ( ).

If you’ve ever read Bound For Glory, think about King Buzzo riding those trains like Mr. Guthrie, hollering perdition rent glossolalia Melvins-speech at stunned cows and peasants outside the moving box car. Buzz is on the road again.

The legendary front man kicks off a full U.S. tour on June 10 in San Diego, and will chronicle his adventure via Noisey.com.