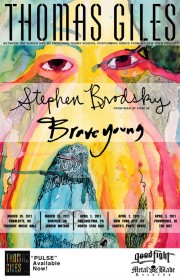 Thomas Giles aka Tommy Rogers (vocalist for Between the Buried and Me) will be performing songs from his current release “Pulse” on a brief tour this spring. “Pulse” is Roger’s newest endeavor, taking on all the responsibilities of a full band’s performing, but done by one man. The result is a dreary and delightful album. Support on the tour will be provided by Steven Brodsky (of Cave In) and Braveyoung.

“I never thought that tour dates for “Pulse” would see the light of day and now, here they are!” commented Rogers. “Along for the ride will be the amazing Steve Brodsky and Braveyoung. Come out and hang!”

“Pulse” was released earlier this month on Metal Blade Records.