Three bands we are most excited for at Northern Invasion 2018 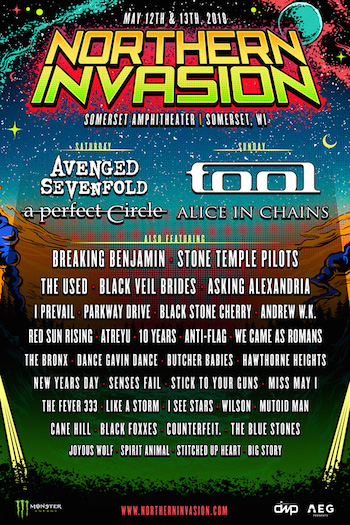 Hey gang. Tool, Avenged Sevenfold, A Perfect Circle and Alice In Chains cap off the rock solid lineup for the fourth annual Northern Invasion, Saturday, May 12 and Sunday, May 13 at Somerset Amphitheater in Somerset, Wisconsin, just outside the Twin Cities. We decided to compile a little list today of the three sets we are most excited for at the event.

Maynard James Keenan of Tool and A Perfect Circle said, “Looking forward to playing material from the new A Perfect Circle release at Northern Invasion. Bringing new songs to life in a live setting is always exciting.”

“We spent a lot of time listening to our loyal Invasion fan base over these last several months to create a lineup that celebrates some of the rock legends along with delivering on our reputation for inviting the hottest up-and-comers in the genre,” said Joe Litvag, Executive Producer of Northern Invasion. “Having heroes like Tool, Avenged Sevenfold, Alice In Chains, and Stone Temple Pilots matched with new sensations like Parkway Drive, Black Veil Brides, and Red Sun Rising, I think the fans will respond well. It’s going to be an unforgettable weekend!”

Check out our bands to watch at Northern Invasion short list BELOW. 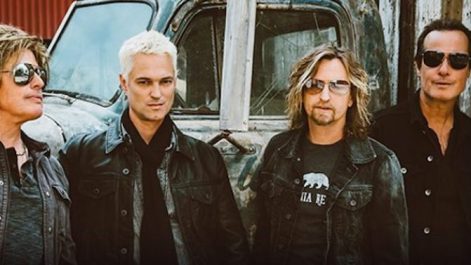 Can the band really cut the mustard consistently without Scott or Chester? Everyone wants to know.  Jeff Gutt  held it down pretty well at his live debut at The Troubadour . Still, dude has big fuckin’ shoes to fill! “Meadow” was pretty cool and we wish the band the best after so many struggles. 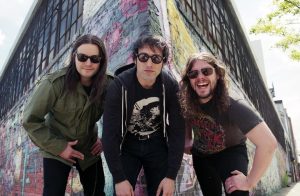 Mutoid Man are just an insanely bad ass group, regularly blowing our minds with their Cave-In/Converge bonkers mathy prog-core and zany antics. This set (and maybe The Bronx) has the potential to be the most chaotic fun.

Sorry, but the main anthem of the year has already been written. No one is topping AWK’s “Music Is Worth Living For.” Don’t even try. It’s off the charts catchy, riffy and motivating. One of the best jams the party master has ever released and sure to decimate the stoked audience live with huge rock and roll good time vibes! Pump those fists and sing along!

Who are you excited for? Will there be new Tool music? Who knows?! Go to the event and find out!

Northern Invasion General Admission and VIP tickets (including layaway options), as well as Hotel Packages and All-Inclusive Camping options, and Tent or RV Camping add-ons are on sale now at http://northerninvasion.com/tickets.html. Fans are encouraged to buy early and save. New for Northern Invasion 2018: Each ticket price level has a limited number of tickets available, so attendees can save more by buying earlier. Ticket prices will automatically move to the next price level once a price allotment sells out. The layaway purchase option also allows fans to split the ticket cost into four monthly payments.