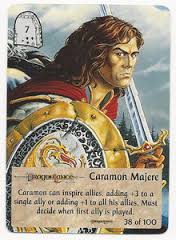 Most Dragonlance loving geeks would be like ,”why is Caramon on here and not his evil siblings Raistlin and Kitiara?” Well, Caramon is pretty metal in his own way and the other two always get all the love amongst RPG fans. Granted, classic anti-hero Raistlin has hourglass eyes and gold skin and probably listens to fucking Paradise Lost all day while his eyes make everything he looks at seem to rot. That is metal as hell. He also gets tortured in the abyss by the Goddess of evil for a long time, but we are gonna focus on his lovable, hulking brother Caramon today instead anyway.

The lumbering and well intentioned massive warrior is the epitome of loyalty, can bash draconian skulls together like no other and basically saves the day on countless occasions. Dude has a cute little sexpot warrioress wifey who can cook (Tika Waylan Majere), has traveled back in time and been a bad ass gladiator plus is one of the original Dragonlance Chronicles companions who started it all. He might be a good guy but he is battle tested and always comes out stronger, even when faced with challenges that are incredibly demoralizing (like, your twin brother pretty much becomes a dark god of black magic). Caramon even conquered alcoholism. 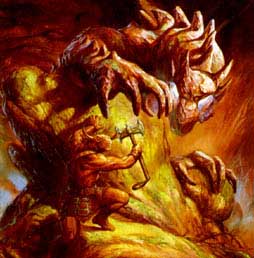 Kaz was a minotaur of Krynn who was noble and brave, even befriending the famed Solamnic Knight Huma Dragonbane. Kaz pretty much helps Huma defeat the Queen of Darkness and eventually also fights a giant fucking dragon made of stone. I mean, you can’t get much more metal than that. He even had a cvlt society formed after him based on his sense of honor. Sure, when we first meet him he managed to somehow get captured by a measly pack of goblins in The Legend of Huma book, but don’t hold it against the big guy.

I was gonna say that Atreyu is not really bad ass enough for Kaz, but the song title  is too fitting here, for obvious reasons. And I do firmly think it is by far the coolest Atreyu song. Still love that chorus hook. 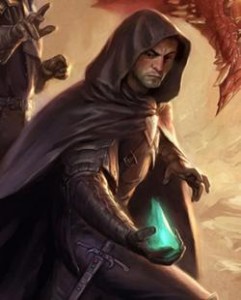 8. Artemis Entreri:
This assasin from the Forgotten Realms setting has a vampiric dagger, comes from a history of horrible childhood abuse and has basically no tolerance for anything but getting on to the next target. Pretty much the ultimate assassin in AD&D, he is also the main foil of the drow Drizzt and is obsessed with proving he is a better fighter. Over and over again.

As Entreri had an “empty life” devoid of trust or loved ones, he is infuriated that Drizzt seems to be of near equal battle skill yet still has had a life with friends and companionship. He came up in the dangerous port city of Calimshan in the world of Faerûn and is not really the type of person to be trifled with lightly. 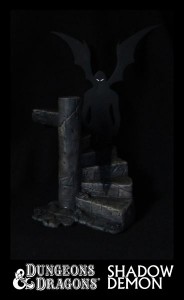 7. Shadow Demon: This Greyhawky demon was way cooler than his master Venger, Force of Evil (kind of a wuss) on the 80’s Dungeons and Dragons cartoon.
I remember as a kid being pretty freaked out whenever I saw this thing on Tv going after the silly teen adventurers on the show. Plus, he was a legit monster from the RPG settings .

Does any song really do justice to an evil shadow demon? I mean, let’s face facts.
This creature is pretty much evil enough in itself that it doesn’t need me being like ,”Hey, go listen to Tool’s “46 & 2” cuz it has the word “shadow” in it, gnar, gnar, gnar.” 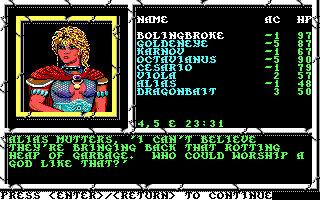 6. Alias: Alias is a Forgotten Realms babe who was in a book called Azure Bonds. She is a six foot tall warrioress, has evil tattoos under her skin that move around and glow and do crazy shit, she has memory problems that would make Logan/Wolverine blush and it turns out she actually was created by bad guys to release something called Moander the Darkbringer. Her best friend is a weird lizard dude named Dragonbait who gave her a soul and she can outdrink most people sheruns into. Alias = pure metal. 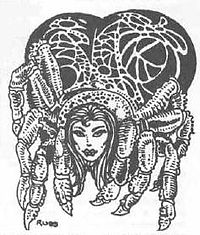 5.Lolth: Demon queen of spiders. What else can I say? Look at this evil bitch?!! Old school Gary Gygax bad girl doin’ it well! I paired her with M.I.A. Now go read Queen of the Demon Web Pits, you wimps!

(not metal but pretty much the baddest girl, like Lolth). 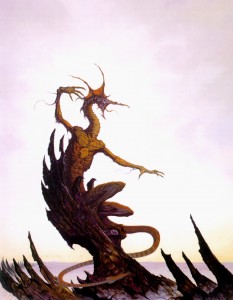 4. The Dragon of Tyr: This Dark Sun bad ass monster roams around a wasteland and is basically unstoppable. Can breath weapon you into a pile of steaming glass in five seconds, has psychokinesis and precognitive abilities, is taller than most buildings, makes sorcerer kings of a barbaric, murderous desert hell world whimper. Is a supra-genius with a -1o Armor Class. Not someone you want to meet in a dark alley in Jersey. It was a tough call between this dragon and a green dragon named Cyan Bloodbane, but The Dragon of Tyr wins in the end. Just so nasty.

Song: Dragon Force “Through the Fire And Flames” 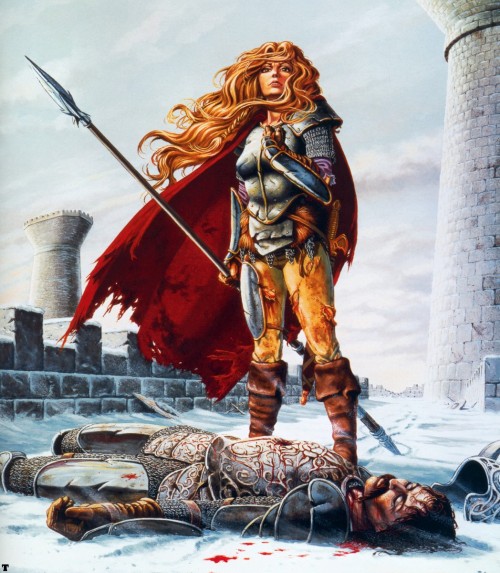 3.Laurana Kanan: Lauralanthalasa Kanan from Dragonlance makes the list for many reasons. She is the lady all the girls would want to be if she was on an HBO series. This elf lady starts off as a kind of spoiled and naive elf princess but ends up becoming a general for the forces of good, facing a five headed dragon goddess and becomes the mother of other great heroes. She also manages to help defeat an extremely powerful overlord green dragon Beryl later in life. Laurana is the epitome of diplomatic smarts, fragile beauty and the triumph of will in the face of despair. Laurana is also the key figure in one of the most iconic Dragonlance images, the death of Solamnic Knight Sturm Brightblade. 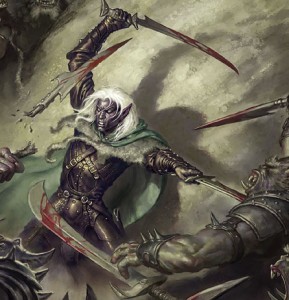 giants in five seconds, has two scimitars, a feakin magical panther and is basically the favorite character of every role playing geek ever.

1.Lord Soth:  No contest. Lord Soth is a Dragonlance Death Knight who caused a world wrecking Cataclysm, went from a once proud Solamnic Knight to an adulterous, elf banging hot mess who eventually is cursed to become the Knight of the Black Rose, ride around on a Nightmare (a black horse with flaming hooves) and stay stuck in an evil keep with freaky banshees reminding him all the time what an asshole he was in life. Lord Soth is involved in some of the most adrenaline filled, nail biter moments of many a Dragonlance and even some Ravenloft books. Dude can literally tell someone to die and they will. I mean, Lord Soth is obviously more metal than everyone. He is not scared of anything and also likes to crush on hot female Dragon Highlords. Winner!

Song: Sepultura “Beneath The Remains” [youtube]http://youtu.be/rLvnqKOtJaw[/youtube] 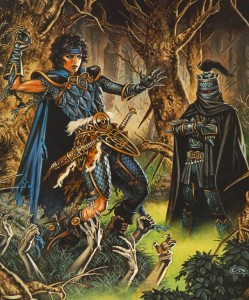 Honorable mention as most metal band associated with an AD&D Fantasy world:

Morgion. They were named after an evil Dragonlance god and had a whole album named after Solinari, a moon of the world of Krynn. Morgion should be bigger than Miley! Reunite!!!