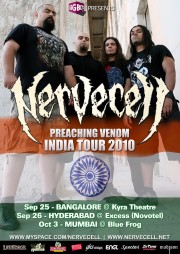 Earlier this month Dubai based death metal outfit Nervecell returned home from the Preaching Venom India Tour 2010.  The band has posted a video diary containing footage from the tour including live footage from some of the shows and behind the scenes footage around India.