Tournament – Montana and Jordan on the deep truth of “Teenage Creature” 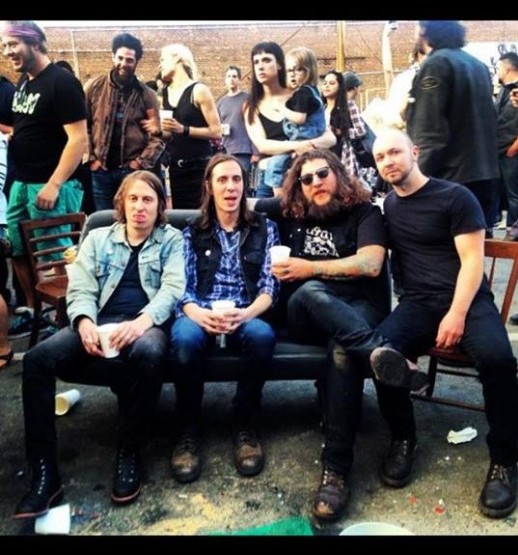 “We started off as a government experiment gone right for once. Designed by
naval science officers aboard the “USS who gives a shit” ~Montana (vox/guitar)

Gossip Girl, Megan Fox, Taylor Lautner, Sugar Ray, Jar Jar Binks. What do they
have in common? I’m pretty sure they all were on the cover of Rolling Stone in America before
the fucking Ramones ! Chew on that awhile, lovers of rock n roll.

Maybe it is because, like NYC’s Tournament, the Ramones were a band who arguably make rock critics less of a necessity. Just press play/drop a needle and the music packs so much punch that it tells your body and brain most of what it needs to know. It speaks for itself.

I nerd out a lot, and today at the dentist’s office waiting room I was reading Terry Goodkind’s Phantom. There is a part where the characters are discussing the magical Sword of Truth and someone says ,“It is not the weapon that matters so much as the man who wields the weapon.”

This is also very true of the guitar (with a disclaimer that it doesn’t just have to be a “man”). Proof can be witnessed when Tournament play The Acheron with Ex-Cult on May 28th.

Tournament take Brooklyn radittude to new heights and decimate mere hipster bands with antics, alcohol consumption and fiery live shows that have garnered them a reputation as great rockers and solid songwriters. Along with bands like PMS and the Mood Swings, Tower, Mother Feather and The Compulsions, Tournament prove the Big Apple can still be a place where rock n roll can’t be killed. We support this message and recommend you check out the following interview with Montana (vox/guitar) and Jordan (drums) from the group as well as purchase their The End Records debut Teenage Creature post haste. 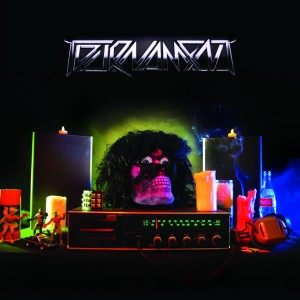 This record is fierce. Did you inject Red Bull into your hearts before
tracking or were you born under bad signs?

We did. It’s awesome. Injecting is awesome, and Red Bull is just as
awesome, and I am glad you brought up injecting because we are known to shoot
up energy drinks into buttonholes. wait what did i just say? did I say red
bull is awesome? Fuck that!that stuff is the worst.. Also be a man and smoke
your inspiration. hence why I have no Lizzy records anymore ~Montana

Did you track this puppy live? It’s got a potent old school rock feel that
is missing in a lot of albums these days.

Yes it was tracked live as a full band to an 8-track tape machine. We did
vocals and overdubs later in the computer. ~Jordan

“Biff’s Future” is one of the cooler tracks. I like that it has a long instrumental section hot on the heels of the opening song (unless my Itunes flipped the track order?). We’re you disappointed in hoverboards?

Yeah iTunes definitely boned you there, it should be smack dab in the
middle at number 6. We are disappointed in hover boards, but more importantly
we really hope old Donnie Trump doesn’t have that sports almanac locked up in
a vault somewhere.
~Jordan

So, I hear some Thin Lizzy. Maybe some Golden Earring. Shit, maybe even some
Venom. Do you care to mention what else lives in your sonic brew?

I’ve known you as part of the scene a long time but never asked when you first
started playing? How have your tastes maybe shifted over the years?

Although we had all been in various bands together before this one we
started playing with our current lineup in 2008. Our individual tastes have
definitely shifted over the years, but collectively I think we all identify
with the same sort of thing and it’s been a constant that hasn’t shifted
much.~Jordan

How’d you get involved with The End records?

We’ve had a number of friends who have worked there or with the label
before, and it had been talked about release a record with The End a number of
years ago. Ultimately the timing didn’t work out then, but we are happy to be
doing this record with them now.
~Jordan

What about the NYC rock scene do you feel is still alive and kicking? What
clubs are your favorites these days? Still doing the Trail House, right? How
do you run a well sourced ethically raised and ingredient focused business and
still have time to rock?

There’s a lot in that question…
8.a ) Yes, there are some great bands in NYC, always has. I’ll make a list and
send to any reader that needs a reset. plenty of fellow rock brothers and
sisters out there kicking the snot out of NYC kids.
8.b ) I like to play suburbia, it’s one of the last house venues that
ethically raises my limp dick every time we play there.
8.c ) And yeah sure, I still have time to rock. I half ass everything.
~Montana

What does the future hold for 2016 for the band? Anyone you want to shout
out? Also, and I didn’t mean to save this for last like it isn’t important,
hahaha…but do you reveal many of your deepest dreams on this album as a band
or is it more focused on, arguably, rocking out? Or is that the deep truth we
all seek anyway?

I think the answer is in the question.

More On: Hard Rock, Exclusive, , The End Records
share on: