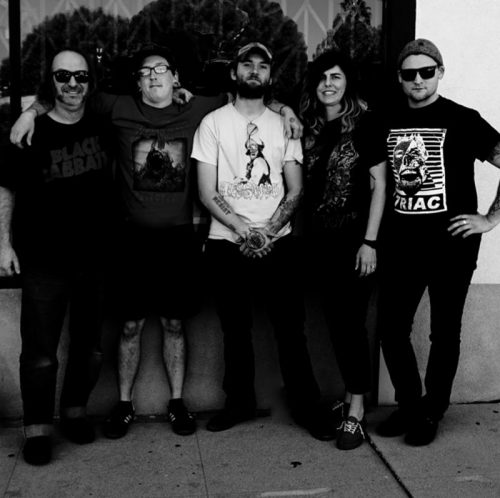 Do you know Transient? You certainly should. The Portland grind band completely smoke a lot of the competition and have finally announced a new record. After a half decade the band- featuring members of Landmine Marathon, Endorphins Lost, and more – will soon return with their second LP, Sources Of Human Satisfaction, set for release via Six Weeks Records in August. The album has the band working with Eric Wood of Bastard Noise and is certainly one of the things to be most excited for in 2018 in heavy rock. Shit, “heavy rock” hardly covers the effects of listening to the severe jackhammer mishap sounds of Transient’s full fledged extreme glory.

The band offers, “The title and concept of the album Sources Of Human Satisfaction deals with human happiness and unhappiness – how people aim to please themselves often through external factors and achievements rather than through a focus on and cultivation of internal controls.  Why do we seek what we seek and desire what we desire?”

Sources Of Human Satisfaction was recorded, mixed, and mastered by Greg Wilkinson at Earhammer Studios Oakland, California, with additional recording by Dylan Ludwig at Raven Sound Studio Prescott, Arizona, after which Wood’s noise elements were recorded by Michael Rozon at Speed Semen Clove Factory Sun City, California. The album is completed with artwork by S. Jordan Palmer and Alexa R. Simpson and layout/photos by the band.

Six Weeks Records will release Sources Of Human Satisfaction on LP and digital formats on August 10th; watch for audio premieres, preorders, and more to be released in the weeks ahead.

TRANSIENT is booking shows in support of Sources Of Human Satisfaction, leading with three shows this week. They will play Phoenix, Arizona this Wednesday, June 6th, Albuquerque, New Mexico on the 7th, leading up to a live collaboration with Bastard Noise at 71Grind in Colorado Springs, Colorado this Friday, June 8th. The band will announce more widespread regional US dates shortly and is in the process of booking a European tour for late summer as well. Expect updates soon.