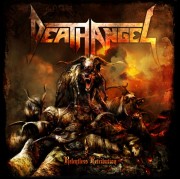 San Francisco Bay Area thrashers Death Angel have uploaded the tracks “Truce” and “River of Rapture” to their Myspace page for streaming. The songs comes off their latest record, “Relentless Retribution,” which was released in North America on September 14 through Nuclear Blast Records.

Death Angel are scheduled to embark on their North American headlining tour in support of their new album “Relentless Retribution” in early 2011.