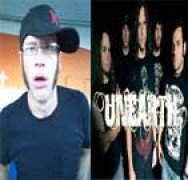 One man production powerhouse Adam Dutkiewicz is getting back to some behind the scenes work. This time, with Massachusetts home state homies Unearth, and their new release from Metal Blade Records. The two are more than familiar with each other. Dutkiewicz is credited with production on Unearth’s “The Stings of Consciousness,” “Endless,” and “The Oncoming Storm.” Pre-production began last week.

As of late, Unearth parted ways with longtime drummer Derek Kerswill and are in Europe on the Persistence Tour. Adam D has been credited with production for many heavy hitters in the metalcore scene, including his own Killswitch Engage. Other notables are All That Remains, Underoath, As I Lay Dying, and a myriad more.