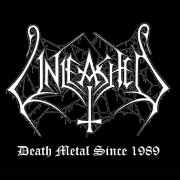 Swedish death metal band Unleashed have recently announced the release of their newest album on April 20, 2012.  It’s being released on  Nuclear Blast Records and is reportedly being called Odalheim.

This will be the band’s 11th release and they have described it as “the story about the future of Yggdrasil and those who survive Ragnarök. It is the story of the Midgard Warriors who carry on the Viking tradition into the new world Odalheim.”

They are definitely getting my vote for most metal album description of the year.

Bassist/vocalist Johnny Hedlund had this to say about the new album:

“Anders (drums) asked me if this might be the fastest Unleashed album to date. I’m not sure, but it’s likely close anyhow.”

The band has also called this album:

“The logical continuation from Midvinterblot and Hammer Battalion.”  “Lyrically, you will recognize what has become the Unleashed trademark since more than 20 years, the combination of the past, present and future of viking struggle and way of life.  A few of the songs also mark the beginning of a story never before told.”