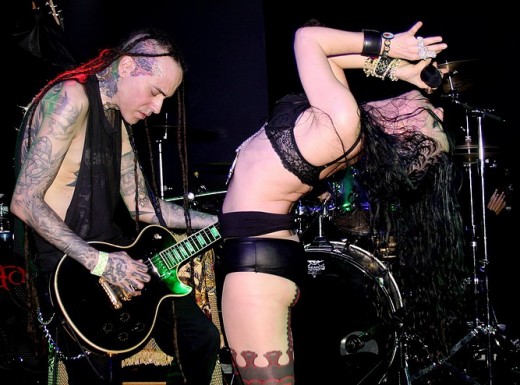 NYC’s alternative hard rock/progressive metal band Vajra are a singular entity, a very special experience who deserve to be playing big festivals to thousands . Even in a small club setting the band recall the exotic blend of  Jane’s Addiction or South Africa’s Tribe After Tribe crossed with the eerie Siouxsie Sioux meets East Indian influenced rock vocals of  Annamaria Pinna. Vajra offer a potent brew, melodic and earthy yet in touch with a completely different plane of existence through forward thinking, elaborate grooves and spiritual energy. The band’s rhythm section recall the proficiency of Tool or Krokodil and their guitarist Dave Sussman used to play in Bile!

Currently the band have over 4600 views in just one week since their newest video “3.14 (Water Mix)” has been released and we here at Metal Riot want to help that number climb. Check the video out below.

Fans can vote for the new video on Loudwire’s top metal countdown HERE. Show some support.

“We are trying to make the Top 10 Rock and Metal Vids at Loudwire. People can vote once an hour until Fri 3/4. Our last video for ‘Inside The Flame’ was tenured as the video that was on the countdown for the longest amount of time. Of course, that’s the goal for this one as well, especially since we did this video 100% DIY (we wrote it, directed it, starred in it, shot it, edited it, art directed etc). It is based on something that happened in my past.” – Annamaria Pinna