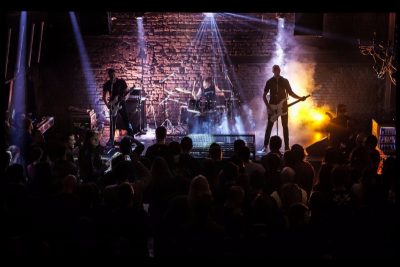 Valborg, once described by the quite choosy yet very metal authority Tom G. Warrior himself as “abundantly original and unique“ and “a mixture of Bohren und der Club of Gore, early Black Sabbath and Hellhammer”, have returned with their latest curious offering.

Produced by Markus Siegenhort (Lantlôs), Endstrand is a 13 song end-time vision hosting apparitions of empty beaches, bunkers in the dunes, novel biological phenomenon, washed up artifacts, noise distorted signals and omnipresent whirring, all of which float above the backdrop of VALBORG’s utterly barbaric death crunch.

Sounds cool to us. We liked their last one Romantik. Between this and the news that Neurosis is supporting Fires Within Fires with Converge and Amenra along for the ride, it is a good week for fans of experimental heavy music as we prepare for Saturn to turn retrograde tomorrow.

Endstrand will be out this Friday, April 7th! Check it out first at Decibel HERE. They certainly have a lot of bellowing and militaristic, thumping and near industrialized low end.