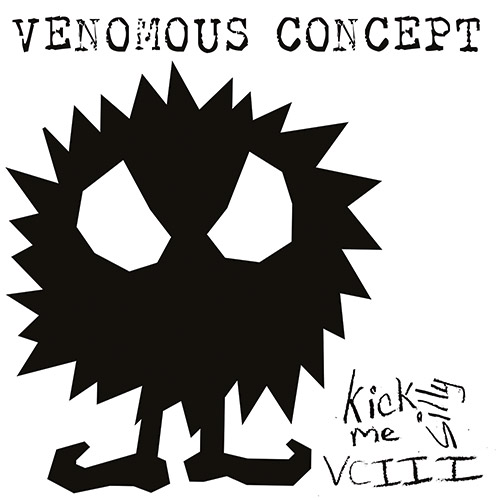 I’ve always thought Venomous Concept was a cool…concept? No, they are actually cool in reality as well. And quite venomous.

Anything Kevin Sharp (ex-Brutal Truth) is part of is always completely unhinged. I maintain that he has the single fiercest howling bellow ape scream in metal history. Go listen to the Damaged album Purified In Pain he was on, fuck!!! While it is a drag Buzzo from Melvins hasn’t been in the group for awhile, VC still have Napalm Death alumni and more. They aint skimpin’ in the awesome department.

Anyhow, the band have silly ass new album art and  are streaming a new track from their forthcoming new album, ‘Kick Me Silly; VC 3’. The track, titled “Rise”, is streaming now with Revolver Magazine.

Regarding the new track, vocalist Kevin Sharp comments: “I like the contrast in guitars here. A decent mix of melodic bite…like if a shoegazer had more nut, less mustache.”

‘Kick Me Silly; VC3’ will be released by Season of Mist worldwide on January 8. The album is available for pre-order across several CD, ltd. LP and ltd. cassette formats at the Season of Mist E-Shop.

More On: Grindcore, Music, , Season of Mist
share on: