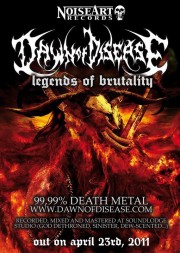 German death metallers Dawn of Disease, who will be releasing their debut album “Legends of Brutality” on April 22nd via NoiseArt Records, have released their first official album trailer.

The band has also added another live show, on September 3rd Dawn of Disease will devastate the Ballroom in their hometown Osnabrück!