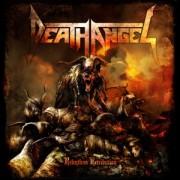 Appropriately premiering on Fangoria, the best and most brutal of horror magazines, Death Angel show the world the first video from their newest offering “Relentless Retribution” on Nuclear Blast. Also, the song is steaming on their MySpace.”Relentless Retribution” was released September 14, 2010. Currently, Death Angel is on tour in Europe for the rest of 2010. A U.S. tour will begin January 24, 2011.